A filmmaker puts the final touches on a documentary about the legendary district.
Posted July 20, 2016 by Jeff Prince in Film 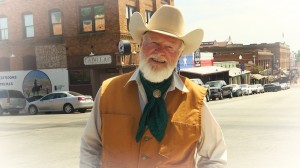 Red Steagall will host an upcoming documentary on the Stockyards. Photo by Joel Walters.

A bunch of cowboys are expected to be sidling up to bars and moseying down sidewalks in the Stockyards this weekend. The fourth Saturday of July is the National Day of the Cowboy, a nonprofit organization’s celebration of people, organizations, and projects that contribute to preserving the pioneer heritage. They’ll be getting a close-up look at a 70-acre area pegged for renovation and new construction. Local purists want to keep things in the entertainment district rustic and real. They love the smell of longhorn patties baking on red bricks in the morning and the look of old wooden pens and fences and barns.

The late Holt Hickman’s surviving relatives, now led by Holt’s daughter, Brenda Kostohryz, and son, Brad Hickman, own most of the historic area. They want Majesty Realty Co. to sink $175 million into building new properties and renovating others to add glitz in the form of retail and hotel space. City leaders are siding with the revamping and willing to throw in millions of dollars’ worth of incentives.

My, how people forget. City leaders wanted to bulldoze the whole kit and caboodle in the 1970s. A documentary film in the works has been designed to help us all remember the area’s past, although the makers of The Fort Worth Stockyards: A Marriage of Preservation & Progress say their film isn’t biased one way or the other regarding renovation.

“The film is not about the political issue and wanting to stop any of that,” said film project coordinator Rosalie McLeod.

Long after the cattle pens and meatpacking plants that defined the Stockyards fell into decline, the area became dodgy and dangerous. Fort Worth’s homeless had migrated there in the 1950s after being run out of the downtown area that was razed to make way for the Fort Worth Convention Center.

By the 1960s, the Stockyards had become an embarrassment compared to its early 20th century heyday, when it was one of the country’s busiest livestock markets. The meatpacking plants had all closed by 1971. City leaders talked about clearing out the old buildings and starting fresh, prompting Stockyards enthusiasts such as Roberta “Bert” Walters, Steve Murrin, and others to snatch up properties to try to turn things around.

“Had there not been a transition out of that rough and seedy situation that existed in a lot of the Stockyards area, demolition would have been a very plausible and reasonable idea,” said the film’s producer and director Joel Walters. “But a lot of people who cared about the Stockyards came in there and began to clean it up.”

Transitioning from a worn-out cattle yard to a tourist haven makes for a colorful period. The National Register of Historic Places lists areas worthy of preservation, and this federal group added the Stockyards to the list in 1976. Billy Bob’s Texas would become the world’s largest honkytonk in 1981. Street festivals and wall-to-wall bars, restaurants, and shops helped give the area a party reputation. Cowboys on horseback began driving longhorn cattle down Exchange Avenue each day beginning in 1999. The street festivals got so big and wild that they were moved to Sundance Square in the 2000s. Hip-hop clubs opened in the Stockyards in the 2000s, met resistance from the purists and police, and closed down before long.

Walters was among the crew that created another documentary, Wall Street of the West, in 2002. That movie covered the early Stockyards zenith up to the closing of the meatpacking plants and is shown periodically on KERA-Channel 13. Proceeds from those DVD sales have raised tens of thousands of dollars to help fund the Stockyards Museum. Walters is a native Texan who found his way to the Stockyards by working as an independent producer filming cattle auctions for television in the early 1990s. He also produced and directed The American Rancher series on RFD-TV, hosted by Pam Minick, former Billy Bob’s Texas marketing director and women’s world champion calf roper.

Walters and McLeod have similar visions for the new documentary. They plan to sell DVDs online, get airtime on KERA, and show the film at city and chamber of commerce functions. The Lone Star Film Festival has agreed to screen the movie in November as part of the annual event. Money raised by the movie will be spent on Stockyards preservation, McLeod said.

The idea to make a new documentary was born, ironically, in death. Old timers with links to the Stockyards had been dying off for years, and their stories went to their graves with them. McLeod, Murrin, and others were drinking beer at Cattlemen’s Steak House after a funeral in 2009, lamenting that nobody had ever interviewed the man to keep his memories alive. Walters and McLeod decided to helm a film project and set out to raise $40,000. They didn’t get close to that number. With only a few thousand dollars in the kitty, Walters and his small crew began filming, hoping to raise more money as they went. Walters interviewed about 50 people but couldn’t come up with money to pay for production costs such as editing, sound mixing, and DVD replication. The raw footage sat on a shelf for five years.

All that changed in 2014. Donors began stepping forward after city officials became infatuated with Majestic Realty’s plans. The movie budget quickly grew to $24,000, with most of the new money coming from preservationists, even though Walters and McLeod are telling everyone that the documentary won’t take sides.

Walters’ first documentary covered Stockyards history up to 1971. The new movie will span the 1970s to the present. C&W singer and cowboy poet Red Steagall narrates the documentary, and the filmmakers have gathered stories from Murrin, Holt Hickman (before he died in 2014), actor Barry Corbin, former White Elephant Saloon owner Joe Dulle and current owner Tim Love, and many others. Some of the stories are amazing. Western troubadour-turned-actor Don Edwards recalls playing his guitar and singing on horseback at the Cowtown Coliseum rodeo. Afterward, he would ride his horse across East Exchange Avenue to play his regular gig at the White Elephant. One day he rode his horse into the saloon and onto the stage, which went well until a ceiling fan clipped his cowboy hat and spooked his horse. To hear the end of that story, you’ll need to see the film. Walters expects to complete the editing in about six weeks and release the movie by late summer. DVDs can be pre-ordered via the film’s website.