Skip to content
Posted June 11, 2015 by Kevin Buchanan in Blotch 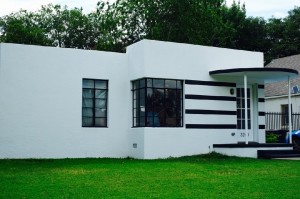 In the late ’30s, a Fort Worth cement contractor named C. M. Davis came up with an idea to kill two birds with one cement-colored stone: to demonstrate that cement was capable of being used in an architecturally interesting way that was within reach of the everyday homebuyer, and to build a series of small, affordable homes in the city during the depths of the Great Depression.

He dubbed his solution the “Aparthome,” for “apartment home,” and did indeed build several units in the neighborhoods near Texas Christian University. The small, tidy, efficient homes in the gleaming white Streamline Moderne style stood out from their neighbors, resembling something more like something you’d see in South Beach, Miami or a 1939 New York World’s Fair exhibit than the bungalows and cottages that dominated Fort Worth’s residential neighborhoods. The Davis homes didn’t take over the city, but they made a bold statement, showcasing inexpensive residences that still made exciting architectural statements.

Fast forward 77 years or so, and a handful the C. M. Davis Aparthomes remain standing in Fort Worth, in varying states of condition. All are in danger of demolition because of the steady creep of development around TCU, and –– as is far too common the case in Fort Worth –– none are protected by historical designation.

The most noticeable home, which is smack dab in the middle of TCU’s campus growth is also the one that’s been cared for the most. It’s home to Firm 817, a local architecture and design firm, which has taken care of the historic building and added on to it over time. The danger in this case comes mainly from TCU itself. Everything else on the block that used to stand alongside the home was wiped out for that most unfortunate of developments: a parking lot. 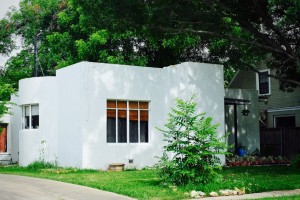 Other homes are scattered around the blocks south of Berry. A passing examination shows that most of them are rental properties, which in and of itself is no issue, but it’s hard not to notice that more of the historic building fabric of the TCU-area neighborhoods are being replaced by enormous rental homes in clumsy faux-bungalow styles targeted at students. Any such loss is unfortunate from a preservation perspective, but given the Davis homes’ unique style and their interesting backstory, it will be doubly tragic to see them scraped off the land in favor of a giant student rental house.

Preservation vs. development is a delicate balance, and while yours truly is a strong supporter of better preservation in Fort Worth (especially given our city’s rather abysmal track record in that department), I’m not an absolutist. I also want to see the central city become more walkable and denser.  In this case, though, I’d argue that some pieces of history are too unique and too irreplaceable to be allowed to fall victim to the bulldozers. It would be fantastic to see some effort to get protection put on the Aparthomes before it’s too late. Any historic designation could be custom-tailored by the owners, so as not to overly impact repairs or usage of the houses. It’d also be a step forward for city hall to start doing a better job of protecting our city’s most distinctive architecture while it’s still around to enrich our neighborhoods.